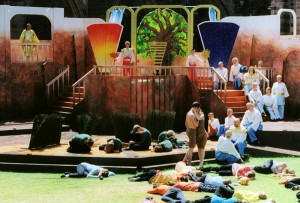 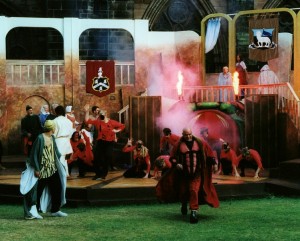 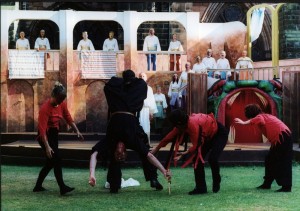 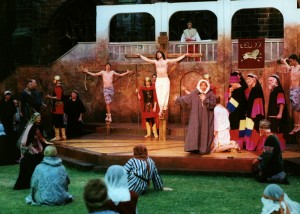 This large scale outdoor production takes place every five years on Chester Cathedral Green. It is one of the largest community theatre projects in the UK, involving 100’s of local people. The plays had a cast of over 200 local people. I had to design all aspects of the set, costumes and props, and co-ordinate the work of a professional production team with all the local volunteers. The outdoor nature of the production also brought it’s own problems, with the need to weatherproof (as far as possible) not only set and costumes, but also all sound and lighting equipment.

Taken from the novel by Victor Hugo, the story is told by a company of gypsies, (based on 150 Spanish travellers who arrived unannounced on Wandsworth Common in 1914). The gypsies appeared overnight and brought with them the colour and spirit of Spanish gypsy culture, but as quickly as they arrived they were gone. A couple of patchwork tents, a floor-cloth, some crates and odd bits of furniture were all that was needed for them to tell their stories, with simple changes of costume to help represent different characters. 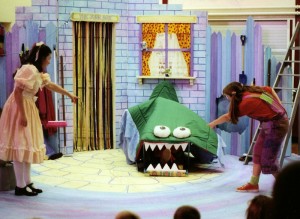 This was a musical play for 3 to 7 year olds. After touring schools and nurseries in the Autumn term it went on to a very successful Christmas run at Leicester Haymarket Studio. The play was set in the back yard of a junk shop where Jack and her Grandad invented stories and adventures using the discarded “junk” lying around, encouraging children to use their own imagination and creativity. A huge variety of props were used by the actors to shape the story. 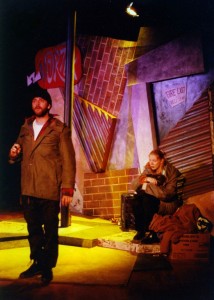 This was a play aimed at children fourteen and older, dealing with the problems faced by young homeless living on the streets. Before embarking on this project the writer, director and I spent time in devising workshops with several secondary school classes, which certainly helped to inform the final design. The set represented the back alley behind a nightclub, lit by the pool of light from one street lamp. 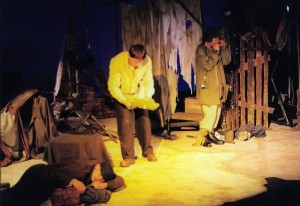 This was a play for 7 to 12 year olds concerning trust and friendship. It is set during a war, which could be in any time or place, and shows how a young boy and an old woman supposedly on opposite sides can overcome fear and mistrust to form a friendship. The writer, director and I spent time in devising workshops with primary school children. The challenge of this production was the amount of different scenes the play demanded and the depiction of a war torn landscape in a very small space using very little set. Just about every piece of set moved many times during the course of the action and each piece had to be light, durable and able to be used in several different ways. 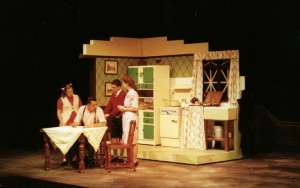 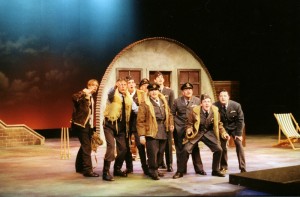 This was only the second community production that had been staged by the Queen’s Theatre (the first was “A Tale of Two Cities” the previous summer which I also designed).The play prompted great interest from local people as it was based on a true event that had occurred in Hornchurch during the Second World War. In fact tickets were in such demand that the play was revived later that year for a further week of performances.